Each of the diagrams can be turned into a loop by drawing another arrow that joins the last element in a permutation with the first one:

Next, take the dots and arrange them evenly around a circle:

So far, these correspond to the Stirling numbers of the first kind s(n, 1).

And if the direction of the arrows doesn’t matter, there’s only one shape:

This is what you’d get if you stretched a rubber band around n nails spaced evenly around a circle.

For n points, the number of distinct loops is n!/(2n). To begin, the number of permutations of n elements is n!. When the first and last elements are joined to make a loop, the overall count is divided by n because each loop is represented by n different permutations, one starting at each of the points: 123, 231, and 312 are equivalent counterclockwise loops, and 132, 213, and 321 are equivalent clockwise loops.

For greater values of n, then, more shapes are possible. For example, there are 3 basic ways to twist a rubber band around 4 nails, corresponding to 4!/(2·4): 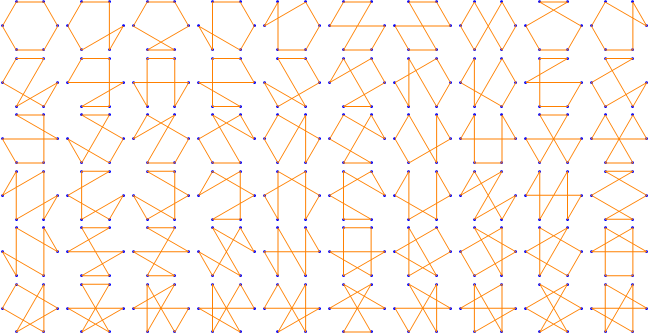 The same reasoning applies to counting necklaces or bracelets made up of n distinct beads, where the points change places for each permutation but the overall shape is always a circle.

This is sequence A001710 at the Online Encyclopedia of Integer Sequences.