Stirling Numbers of the Second Kind

The Stirling numbers of the second kind, or Stirling partition numbers, describe the number of ways a set with n elements can be partitioned into k disjoint, non-empty subsets. Common notations are S(n, k),

, where the first is by far the easiest to type.

Here are some diagrams representing the different ways the sets can be partitioned: a line connects elements in the same subset, and a point represents a singleton subset.

You’ll notice that S(n, 1) is always 1: there’s only one way to partition a set into one subset, which is to leave it alone.

You’ll also notice that S(n, n) is also always 1: there’s only one way to partition a set of length n into n subsets, each of length 1.

The Stirling numbers of the second kind also count numbers of ways to place nonattacking rooks on a triangular checkerboard. (Compare with the S(4, k) diagrams.) 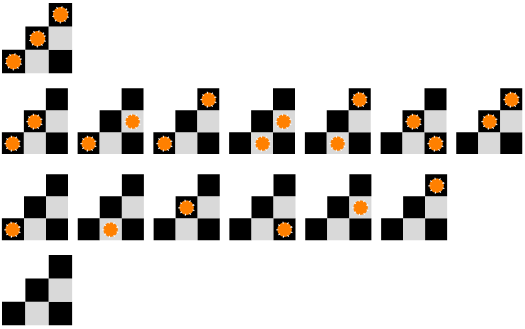 (Does the game of checkers use rooks?)

The numbers can be computed recursively using the formula: 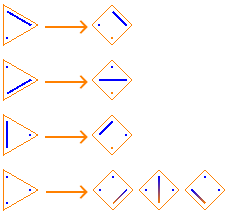 The sums of the Stirling numbers of the second kind,

are called the Bell numbers.

Designed and rendered using Mathematica 3.0 and 7.0.